The Most Legally Advanatageous States for LGBT Families and Why. By: Alexandrea Perez

The topic of gay rights comes down to partisanship. Many states that are considered more liberal have more rights for homosexual persons than do conservative states. One’s preferences can be determined by political party and ideology, which have caused extreme polarization and current divisiveness of the country. It is no wonder that states such as Alabama, Florida, Kentucky, Louisiana, Mississippi, Missouri, Tennessee, and Texas all have the worst levels of LGBT equality than states such as California, Colorado, Hawaii, Maine, Massachusetts, New Jersey, New York, Oregon, Vermont, and Washington. The political split has forced those in the LGBT community to “forum shop” and/or research a location with regard to its legal coverage in order to decide where to live. 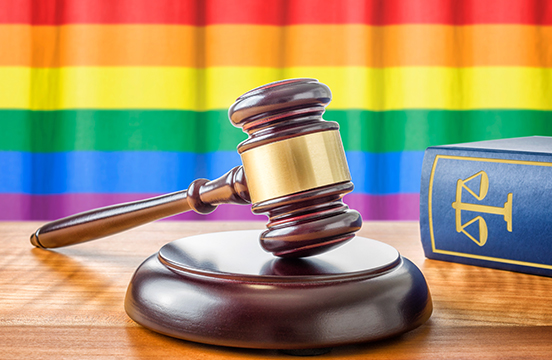 Many LGBT persons, as well as couples, still face discrimination throughout the country. Homosexuals do not have the same rights as heterosexuals including, but not exclusive to, adoption, employment, accommodations, school anti-bullying, education, transgender healthcare, and conversion therapy. These are, and should be, basic human rights held by the United States for everyone in the country. However, the trend continues that states that are along the Southern belt line do not recognize these rights for homosexuals, but states along the New England and Pacific West region of the United States offer the most rights to their LGBT citizens. Needless to say, this makes being a member of the LGBT community that much more difficult.

The reason that there is such discrepancy amongst different states is because these decisions have not been settled by a higher court. Same sex marriage is legal because the highest court in the land, the Supreme Court, declared same sex marriage legal in 2015. If there is to be uniformity of LGBT rights throughout the country it would need to be decided at the federal level instead of the state level. This is the only hope for any uniformity in the laws for the LGBT community.

It is no coincidence that the most legally advantageous states are also the most socially liberal as well. Colorado, for example, was one of the first states to legalize marijuana medically and recreationally. Theses trends have been evident for decades, and as the country becomes more polarized, these trends do not seem to be coming to a halt anytime soon. The effects of the recent election have further divided an already polarized country. Hot topics such as LGBT and transgender rights have been apparent since the beginning of the election. To date, only 14 states, and the District of Columbia, have a state statute or appellate court decision allowing same-sex couples to get a second parent or co-parent adoption according to the National Center for Lesbian Rights.

Family law is an area in which LGBT rights have been challenged and vary from jurisdiction to jurisdiction. The “‘best interest of the child’ is the guiding principle in determining custody between two legally recognized parents,” likewise, the best interest plays the same role when determining the eligibility for adoption. Most states are preserving the “sexual family” that goes in line with heterosexuality or the traditional roles of the family household. A man married to a woman conceives the best possible environment for a child, according to these jurisdictions. Although there is no empirical proof for such accusations, it seems that the country still believes in this concept.

Although the Supreme Court legalized same-sex marriage in 2015, people of the LGBT community are still marginalized throughout the country. They face discrimination on the bases of their sexual orientation and are presented with challenges throughout their everyday life. The United States is part of the Westernized society of the world, however, still lacks human rights for those who are homosexual. A majority of states allow discrimination in employment, housing, and public accommodations. Personal differences aside, our government is supposed to protect the rights of all individuals, regardless of sexual orientation.

In 2017, there were 100 of anti-LGBT bills introduced according to the Human Rights Campaign. The harshest legislation happens to come from the southern part of the country, the same part that is the least advantageous for homosexuals. In Kentucky, legislation was passed enabling students at public colleges, universities, and high schools to discriminate against the LGBT community on the basis of religious freedom and still receive funding. The students have the religious freedom to start the club, however, what they do not have is the power to discriminate against those who wish to join.

In the past, the sexualization of the LGBT community has been apparent since it is the only community group to be defined by its sexual practice. In the eyes of many, including the court, LGBT couples are not capable of nurturing children; hence why only 14 states allow second parent adoption. To change the traditional perceptions of the family and LGBT couples’ rights, the standard of over-sexualizing this community must stop.

The states with the most LGBT liberation are liberal in nature. These states not only fight for the rights of the LGBT community, but also the rights for immigrants, refugees, the homeless as well as lower income families. If one is looking to settle down in a state where they would not feel discriminated against, the southern region of the country as well as small rural areas should be avoided. This is because these states are simply more conservative with the way they perceive their everyday lives. It makes sense that a tightly wound niche would not want anything disrupting the life they are used to living.

It is hard to believe that it has already been five years since the United State Supreme Court handed down its decision in U.S. v. Windsor, (570 U.S. 744, 2013) in which it declared to the Congress that the 1996 Defense of Marriage Act’s (“DOMA”) restrictive definition of marriage (as only possible between an opposite-sex couple) was unconstitutional.

But that is because for the vast majority of Americans, Windsor was little more than a moral victory, a long overdue Federal recognition of the right of any couple to sanctify their decision to be together for as long as they both shall live. To the much smaller number of people directly affected by this decision (LGBT Americans comprise about 4% of the total demographic), Windsor provided an immediate panacea for the suffering they had endured in the forms of repudiation, ridicule, and logistical headaches. Same-sex marriage was suddenly completely legal, recognized by all arms of the Federal government and accompanied by all the usual rights a married couple could expect to come into.

And yet, an even smaller group of Americans has had to wait longer still for a chance to recover what once had been lost to the Feds: wealthy same-sex couples.

In fact, it was a wealthy same-sex couple that got the Windsor ball rolling. Edith Windsor, sole beneficiary of Thea Spyer’s large New York estate, was not allowed to claim the federal estate tax exemption under DOMA (the couple had married in Canada), and Edith had little choice at the time but to cut a check to the IRS for $363,053.00).

Recently-published IRS Notice 2017-15 at last provides the raison d'être and administrative framework for same-sex spouses and their estates to recoup funds previously paid over to the Treasury, which should have been exempt under the Internal Revenue Code but for DOMA.

In a nutshell, 2017-15 provides the relevant Code basis for affected taxpayers to recalculate their taxable estate, accounting for the unified tax credit ($11.18M per individual in 2018 per IRS Pub. L. No. 115-97), generation-skipping taxable transfers, and excludible gifts ($15k/individual/year in 2018). The recalculation is made via IRS form 709, amended form 709, or Form 706 (the latter for taxable estates). Despite the best efforts of the IRS, this is by no means a straightforward matter, and you should always consult a qualified tax attorney and/or CPA estate specialist when considering these sorts of issues.

If you or someone you know might be affected by these new IRS guidelines, or would like more information, call the Quattro Firm today to discuss your estate tax situation and best course of action.

Schedule a legal consultation with an Attorney to discuss your legal issues.