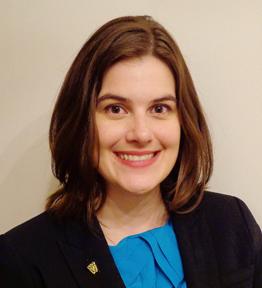 Melanie Bruchet was born in Key West, Florida, and raised between there and Tallahassee. She graduated from Bryn Mawr College in 2009 with a major in Classical and Near Eastern Archaeology and a minor in Geology. She spent the winter term of her junior year working at an archaeological field school in the United Arab Emirates, where she learned excavation and conservation techniques and developed a healthy love for Middle Eastern cuisine. At Bryn Mawr, Melanie was involved with the Shakespeare Performance Troupe, Smart Women Vote, and the Social Justice Pilot Program.

After college, Melanie moved to Macon, Georgia, to attend the Walter F. George School of Law at Mercer University and graduated in 2012. During the J.D. program, she served on the Board of Directors for the Stonewall Bar Association of Georgia as well as the president of Project Equality, the law school's LGBT affinity group, for all three years. Melanie completed internships at CASA (Court Appointed Special Advocates) for Children and the U.S. Attorney's Office for the District of New Jersey during her summers. She earned the Dean’s Distinguished Service Award and the Law and Public Service Program Certificate of Achievement for her work during law school. She also received a Certificate in Advanced Legal Writing, Research, and Drafting.

Melanie Bruchet also was a member of the first class of Mercer's LL.M. program in Federal Criminal Practice and Procedure, earning that degree in 2013. She completed internships in the U.S. Attorney's Office for the Middle District of Georgia and the law firm of Hogue and Hogue, LLP. She worked for both the District Attorney's Office and the law firm of Fox and Smith, LLC, a private criminal defense firm, while she was in Macon and was inducted into the William Augustus Bootle Inn of Court. Melanie has presented nationally on the subject of human trafficking as well as LGBT youth in the juvenile court system. She has also co-authored an amicus brief to the Georgia Supreme Court on the issue of post-separation custodial rights and the emotional effect on children of divorced parents.

Melanie currently lives in Asheville, North Carolina, where she is studying for the North Carolina bar exam. She maintains an active bar license in Georgia and is sworn in to both the Georgia Court of Appeals and the Georgia Supreme Court. She enjoys kayaking and hiking with friends, cooking, and photography.